This is a particularly beautiful problem that I really loved solving in Irodov. This is one of the those rarely well crafted problems that simply makes you admire the man's ingenuity in creating problems. Enough of admiration (I could not help it) and now let's get down to the solution.

Before I get into solving the problem lets gain some perspective. Let us start by considering a much simpler problem - a disc on an inclined plane as shown in the first figure. There are two forces acting on the disc in the direction perpendicular to the slope i) the component of gravity

and ii) the normal reaction N. Since there is no component of acceleration for the disc along this direction and so we have,

Along the direction of the slope there are two force acting, i) the component of force of gravity

and ii) the force of friction f. Hence we have

The interesting thing lies in understanding that when k the coefficient of friction is given by,

the force of friction acting on the disc is exactly equal in magnitude to the force of gravity pulling the disc down the slope. This critical value of friction if a disc were mere placed on the slope, the friction coefficient will be just sufficient to stop it from slipping. This is indicated from the fact the rate of change of velocity given by equation (0) is 0.

What happens to this disc if we impart if a velocity downwards on the slope? The disc will keep moving down the slope at a constant velocity.

What this Irodov problem attempts to investigate is to answer the question, "at this critical friction coefficient value, what if we impart an velocity side-wise rather than exactly down the slope?"

We shall now start to solve the original problem by considering a general version of the problem for a general value of k. 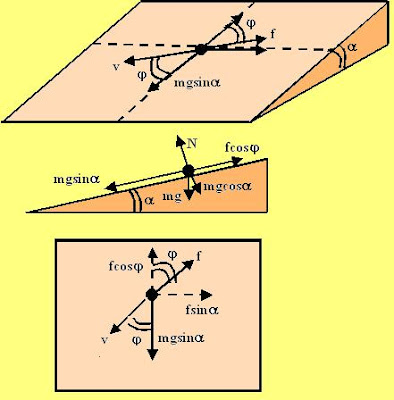 For this problem we have to consider forces in all three dimensions.

Forces along the direction normal to the inclined plane: There are only two forces acting in this direction as shown in the side view (middle picture) , i) the component of gravity

and ii) the normal reaction N. There is no component of acceleration for the disc along this direction. So we have,

Forces in the direction of the slope of the inclined plane: there are two forces acting this direction, i) the component of gravity

and ii) the component of force of friction along this direction

. Let the acceleration of the disc in this direction be wx then we have,

Forces in the direction of 0 slope on the inclined plane : there is only one force acting in this direction namely the component of friction force

. If the acceleration of the body is in this direction is wy then we have,

itself will keep changing and is unknown. But since this angle is the direction of the velocity vector of the disc and can computed from the relation,

These are non-linear coupled differential equations with three variables and not amenable to an easy analytical solution. Since we have to ultimately determine a relation between v and

it is better to derive our equations in terms of v rather than vx.


In the direction of the velocity vector we have:

Also, from the basic geometry we know that,

Thus we can rewrite the equation for dynamics of the body in terms of v, vx and

Now that (4),(7),(8) represent the same motion of the body as do (4),(5),(6) only in terms of different variables. However, even this way of representation is not amenable to an easy general analytical solution for the system.

What simplifies the problem considerably is the fact that the we are operating at the cricital value of friction where the magnitude of force of friction is exactly equal to that of the component of gravity pulling it down the slope, ie.

that the problem specifies.

If the disc is imparted at an initial angle 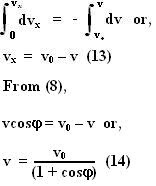 Posted by Krishna Kant Chintalapudi at 1:11 AM 7 comments: