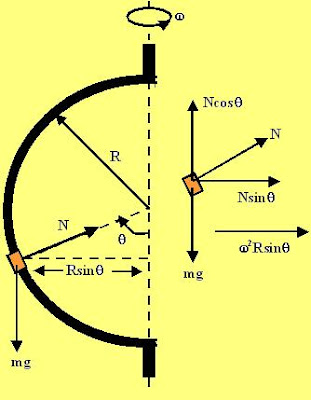 There are two forces acting on the sleeve at any time i) the force of gravity and ii) the normal reaction from the semi-circular rod as shown in the figure. Since the sleeve is rotating about the axis indicated by the dotted line it is subject to centripetal acceleration directed towards the axis. When the sleeve is at an angle

with the vertical, the radius of the circle in which the sleeve rotates is

the centripetal acceleration is thus

directed towards the axis as depicted in the figure.

and this is responsible for the centripetal acceleration and so we have,

. If the particle is static there will be no acceleration in this direction. Hence we have,

Note that cosine can never be greater than 1, this means that for there to be an equilibrium position in the middle of the ring

otherwise the ring will slip all the way to the bottom of the ring where the normal reaction will be vertical and support its entire weight.

In fact the when

the sleeve will experience sustained stable oscillations. For a small angular disturbance

the sleeve will experience simple harmonic oscillations about the equilibrium point given by the equation,

Posted by Krishna Kant Chintalapudi at 12:13 AM No comments: