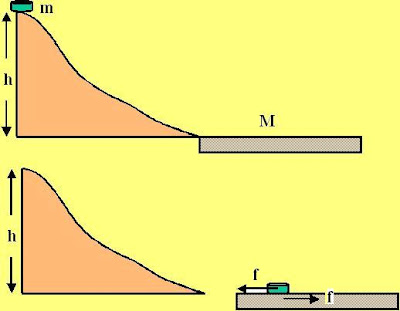 As the mass slides down the slope it looses it potential energy and gains speed (kinetic energy). By the time it reaches the plank let its velocity be v0 . Then we have,

1) From this point the problem can be solved in two different ways, i) using the conservation of momentum and ii) using newton's laws. I shall show both the methods for the sake of interested reader.

Here v'(t) and v(t) are the velocities of the plank and that of the disc relative to the plank respectively. When finally the plank and the mass start to move with the disc, v(t)=0 and so the final velocity of the system is

This the same as we found using conservation of momentum!!! 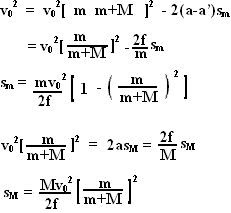 2)Rather than rigorously proving that the result is independent of reference frame I will give an outline reasoning for the proof. Consider an observer in an arbitrary frame F of reference (could be an accelerated frame) . From the point of view of F both the plank and the disc will experience the same set of pseudo forces and so the magnitude of force of friction (depends only on the relative motion between the disc and the plank) between the plank and the disc will remain the same as seen from the point of view of the stationary frame. Also, the motion of the plank and disc will be always aligned with the direction of the force of friction. Further, the distance traveled (measured along the arbitrary curve that they move along as seen from the accelerated frame) by the disc and the plank before the relative motion between the plank and the disc reduces to zero will also be exactly same as derived in part 1 of the question. In other words the work done by friction will also be the same.

Intuitively thinking suppose that this work done by friction heats up the plank and the disc to a certain temperature as seen in one frame, how can this temperature be different as seen from another reference frame?