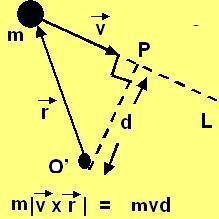 The instantaneous angular momentum of the particle with respect to a point O', is given by

as shown in the figure beside. Here d is the distance of the point O' from the straight line L that passes through the the velocity vector of the particle (given by length of O'P the perpendicular from O' on line L). The angular momentum will always be directed perpendicular to the plane of the position and velocity vectors, i.e. along the z-axis (k is the unit vector directed in the positive z direction i.e. coming out of the surface towards you). The negative sign in the above expression comes because the angular momentum vector will be directed along the negative z direction i.e into the surface (using the Ambrose Flemings right hand rule for cross product). 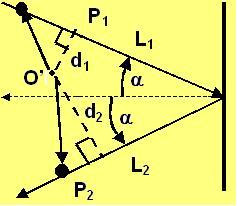 In order for the angular momentum to not change even after reflection, since the magnitude of velocity does not change, the distance of the point O' from the velocity vector of the particle before and after the reflection must not change.
In the figure thus, all the points O' that satisfy the condition d1 = d2 or O'P1 = O'P2. This condition holds true only for all the points that are equidistant from both lines L1 and L2 i.e that lie on the angle bisector of line L1 and L2. 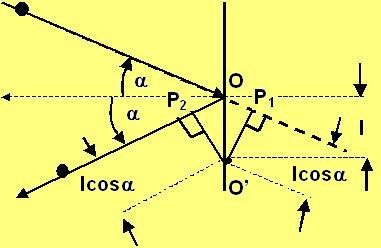 As seen in the figure, the distances of point O' from the trajectories (line passing through the velocity vector) of the particle before and after reflection
is given by O'P1 = O'P2 =

. The negative sign comes because the angular momentum vector will be direction into the surface as obtain by using Flemings right hand rule for cross product.

. The change in angular momentum is thus given by,

Posted by Krishna Kant Chintalapudi at 8:33 AM No comments: