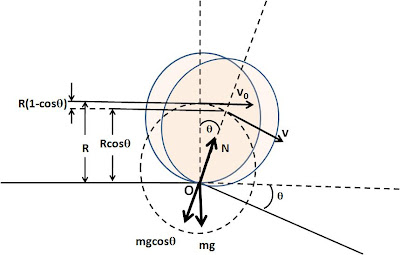 and ii) a rotational kinetic energy of

Since energy before and after the transition in the cylinder's direction of motion about point O, the energy should be conserved we have,

. Since the cylinder's CG is still rotating about point O, at this point its acceleration if given by the centripetal acceleration directed towards O. So we have,

If the cylinder flies off the surface then the normal reaction becomes 0 (since the cylinder is no longer in contact with the surface). So N=0 in (2) corresponds to the maximum v that can be sustained. So we have,

Posted by Krishna Kant Chintalapudi at 8:07 AM 3 comments: