Rather than numbers I will solve this problem in greek alphabet. Let V0 be the initial velocity,
and d be the distance to target. Let initial angle at which the cannon ball was shot be

. Then the range of the cannon ball must be exactly equal to d. From previous problems we know that, 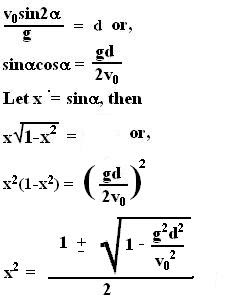 So in general there two possible angles which can be used to hit the target. Thus, we have,

Thus, there are two possible values of time depending on + or - sign. Note that the expressions and the derivations of total time of flight and range of a projectile can be found in any std physics textbook that describes projectile motion. So I did not bother to explain it here.
Posted by Krishna Kant Chintalapudi at 10:21 PM