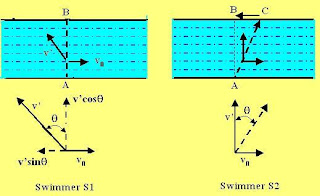 Let us call the swimmer who swam directly from A to B as S1 and the other swimmer as S2.

S1, in-order to swim directly to B from A, had to oppose the flow of the river and completely annul it. This means that S1 must have had to swim at an angle

from the line AB such that, the velocity component along the direction of river flow must be exactly equal and opposite to that of the river flow.
Thus we have,

Swimmer S1's component along the direction AB is then given by,

If the length if AB is d then the time taken by swimmer S1 to reach B is given by,

time to reach the other shore at point C as seen in the figure. Since, he has been drifting to the right with a speed v' to the right, BC will be equal to

. He will thus take

time to reach B from C. This means that the total time swimmer S2 takes to reach B via C will be equal to,

Since both the swimmers reach at the same time, we have, 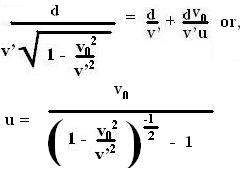 Why is it assumed that swimmer S2 swims perpendicular to the stream? He might as well have a velocity component along or opposite to the direction of river stream. In other words, why is it assumed that only river drift will contribute to the motion of S2 along the flow of the river? Can somebody give me a satisfactory answer, please?

You rock sir. I hope that you look aftrr all our needs