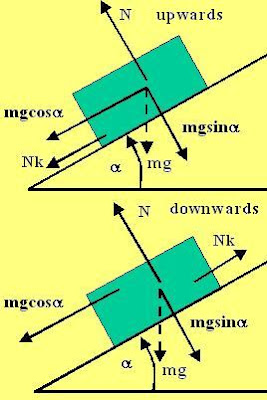 First the block is pushed upwards until it stops. Suppose that it was pushed with initial velocity v and that it decelerated at a rate

and that it took time

to reach the highest point before it stopped. Clearly,

and thus we can calculate the distance s traveled by the block before it stops as,

During the descent, say the block accelerates at a rate

to reach the base, then,

Now from the problem definition we know that,

Now let us determine the values of accelerations in either directions.

During Ascent: The force diagram for the body during its ascent is depicted in the figure. We shall resolve all forces acting on the body along directions parallel and perpendicular to the inclined plane.

Along the perpendicular direction to the inclined plane there are two forces, the normal reaction from the surface N and the gravitational force

. There is no acceleration in this direction and so,

and ii) the force of friction Nk opposing the upward motion and hence acting downward along the inclined plane. The body decelerates at a rate

Posted by Krishna Kant Chintalapudi at 5:14 AM