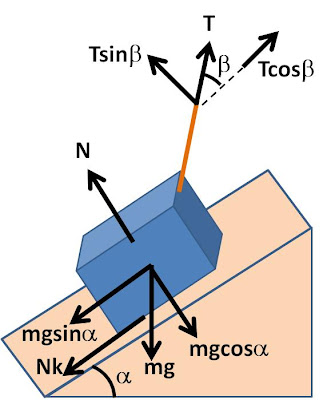 The figure beside depicts the force diagram. Let us try and find the tension T in the string in the problem. Let the mass be m, and further suppose that the mass is being accelerated along the upwards slope at an rate w. Further let us resolve the forces along the directions parallel and perpendicular to the direction of the inclined plane.

Along the perpendicular direction, there are three forces - i) the normal reaction from the surface of the inclined plane N, ii) the component of gravity

and iii) the component of the tension in the string

. There is no component of acceleration for the mass along the perpendicular direction. Thus, we have,

Along the direction parallel to the incline, we have 3 forces acting on the mass - i) the component of gravity

trying to pull the mass down the inclined plane, ii) the component of tension pulling the mass upwards

and iii) the force of friction that opposes the motion of the mass acting downwards (to oppose the upward motion) Nk. We have assumed that the mass accelerates at a rate w and so we have,

Thus, the minimum in tension T can be determined by maximizing

. We can find the extrema (maxima or minima) of

by differentiating it with respect to

and equating this to 0. Thus we have,

Now for this value of

which is negative throughout 0 to 90 degrees. Thus, the above obtained value of

corresponds to the minimum tension in the string.

Further, the value of tension will be minimized at w=0 (the mass is pulled up at constant speed) , thus we obtain,