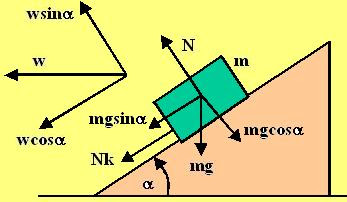 
Forces on the mass m: Let us resolve the forces acting on the mass in directions parallel and perpendicular to the surface of the inclined plane. Along the direction normal to the plane, there are two forces acting, i) the component of gravity

and ii) the normal reaction from the surface N. Since the entire system accelerates towards the left with an acceleration w, the component of acceleration along the normal direction is given by

as shown in the figure. Thus we have,

pulling it down the inclined plane. The component of acceleration of the mass, as shown in the figure is given by