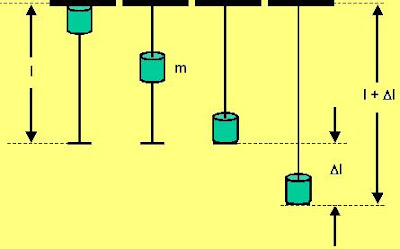 The figure depicts what happens in the problem. The mass m starts its journey from the top and slides downwards until it reaches the end of the rubber cord. At this point the mass has gained a lot of momentum and so when it hits the end it elongates the rubber cord with its impact and weight by a length

. The question asks the value of


The problem can be easily solved by using conservation of energy. The rubber cord exerts a restoring force of

when the rubber band is elongated by

. At this point the mass has fallen a height of

and thus lost a potential energy of

. Also the mass would have stopped moving at this point so it has no kinetic energy. Since energy is always conserved the potential energy lost by the mass must be now stored in the elongated rubber cord. In other words,