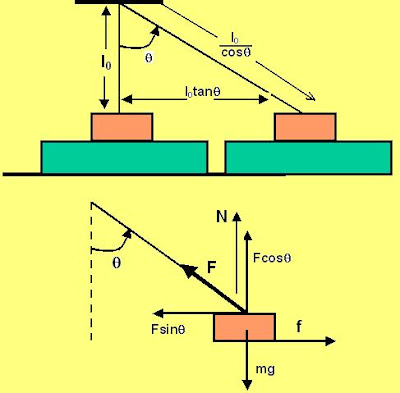 As the plank is pulled at an angle

, the thread elongates to a length

. Suppose that the spring constant of the thread is

. The tension in the thread will be

Let us consider the forces in the vertical direction. There are three forces acting on the bar in this direction, i) the normal reaction N, ii) the component of the tension in the elongated string

trying to lift the bar upwards, iii) the force of gravity acting downwards mg. There is no acceleration of the bar in the vertical direction and so we have,

In the horizontal direction, there are two forces acting on bar, i) the component of the tension pulling the bar back

and ii) the force of friction f. Before slipping, the bar has no acceleration and so we have,

From the point of view of the bar, the force of friction is responsible for pulling it and this elongating the thread (as seen in the figure). This means that the entire potential energy stored in the thread is due to the work done by the friction. When the thread is at an angle

, the energy stored in the thread is given by,

and this is the work done by friction!
Posted by Krishna Kant Chintalapudi at 8:27 AM

very good explanation ;even good than my teacher

Excellent question..got close to the answer but I just coudn't complete it.