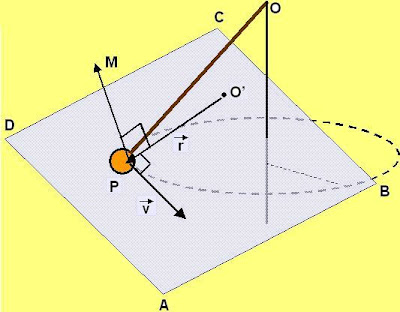 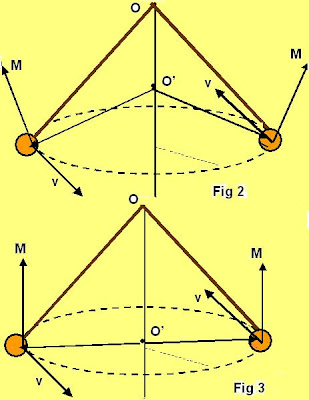 Now let us consider what happens if O' lies at some arbitrary point on the axis. The vector M will be perpendicular to the plane ABCD containing the vectors r and v as shown in the first figure. In Fig2 we consider a certain point O' that lies on the axis of rotation but is above the plane of rotation of the particle. While the magnitude of the angular momentum will be the same as the particle rotates along the circle, its direction will not be the same. In Figure 2 the direction of M is shown for two different positions of the particle along its path to illustrate how the direction on M changes.

The above fact can also be rigorously mathematically derived but I intentionally refrained from the arduous exercise. 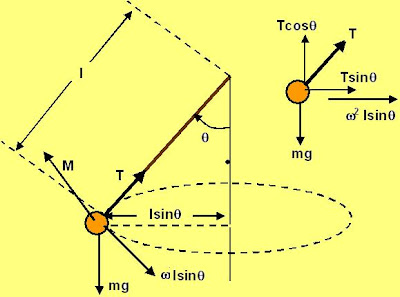 to the vertical. This means that the radius of the circle along which the particle rotates is

. The velocity of the particle will thus be

directed along the tangent of the circle as shown in the figure. Let the tension in the string be T. There are two forces acting on the mass in the vertical direction i) the force of gravity mg and ii) the component of tension

. There is only one force acting in the horizontal direction, the component of tension

. Due to its rotation in a circle, the particle experiences a centripetal acceleration of

along the radial direction as shown in the figure. So we have, 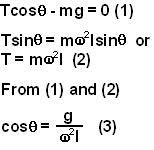 The magnitude of angular momentum vector will not change as the particle moves along the circle however its direction will as shown in the figure. Also the vertical component of the angular momentum will remain changes all through its motion, only its horizontal component will be rotating so that its always aligned radially outwards. So by the time the particle rotates half a circle its net change in momentum will be 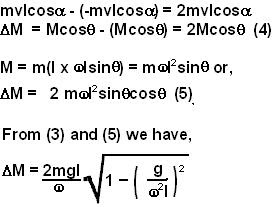 Posted by Krishna Kant Chintalapudi at 8:03 AM