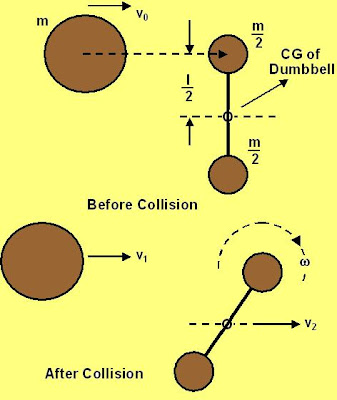 Since this is a completely elastic collision and no external forces or external torques are involved, momentum, angular momentum and energy will be conserved for the entire system.

Note that here we have considered the entire dumbbell as a point mass m concentrated at the center of mass of the dumbbell.

The moment of inertia of the dumbbell about its CG is given by,

Now its just a matter of solving (1), (3) and (4) to get w since angular momentum of the dumbbell about its CG is Iw.

Posted by Krishna Kant Chintalapudi at 12:57 AM