If there were no force acting, as the sand falls momentum would be conserved. The force however acts on both the sand and the cart to change the momentum of the (cart + sand) system. The falling sand retards the cart by increasing its mass while the force accelerates it.
Suppose that at some instant of time t the combined mass of the sand and the cart is m and its velocity is v. The mass m is given by

Force is rate of change of momentum and so we have, 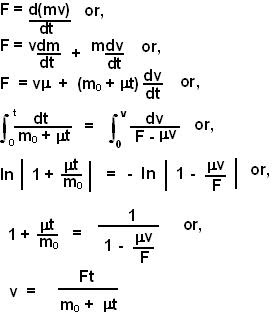 Posted by Krishna Kant Chintalapudi at 9:14 AM

Force = mass*acc is true only when mass is constant.

The real expression is
Force = d(momentum)/dt.