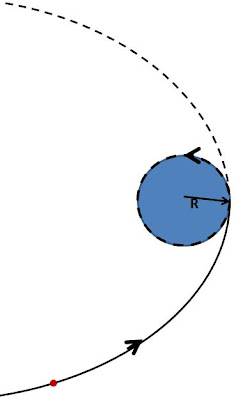 As the problem says that the rocket was following a parabolic path, its total energy must be zero. Since the parabolic path is tangent to moon at the surface, if the radius of the moon is R, then its velocity v1 when it reaches the closest approach will be,

Now the rocket brakes and falls into a circular orbit. As calculated in problem 1.229, its velocity in the circular orbit will be,

The increase in velocity will be v2 - v1 given by,