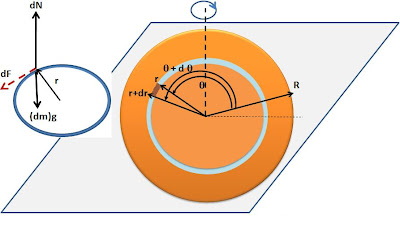 As soon as the disc is placed flatly on the floor, each point on the disc starts to experience a force of friction dF that opposes its motion relative to the floor. While the friction force dF experienced at each point on the disc is the same (since the problem states that the disc applies equal pressure from all points), the resistive torque r x dF generated by the friction force depends on its distance from the center of the disc. Points of the disc that are far from the center generate more resistive torque than those that are closer to the center.

and subtends an angle

from the center of the disc. The total area of this infinitesimally small part of the disc is given by

There are two forces acting on this small piece in the vertical direction the normal reaction from the surface dN and the force of gravity (dm)g acting downwards, and its acceleration in this direction is 0. In other words,

The net torque is given by, 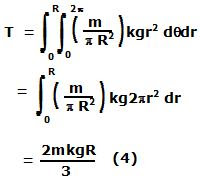 , the angular retardation (deceleration) experienced by the disc is given by,

, the time taken by it to stop will be given by,

If the disc were not homogeneous - not equal density everywhere - then some points of the disc would extert more pressure than others.