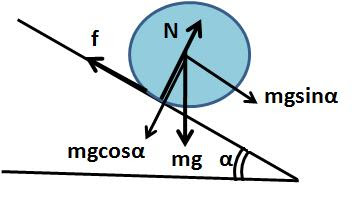 In the direction perpendicular to the slope of the plane we have,

. Since the moment of intertia of a sphere is

If there is no slipping between the surface of the sphere and the inclined plane, then,

The maximum force of friction that any surface can provide is given by Nk, where k is the coefficient of friction. In order for no sliping to be there, the inclined surface must be able to provide the neccessary force of friction f to allow rolling given in (6). From (2) we have,

, then the total kintetic energy of the sphere is the sum of i) translational kinetic energy

and ii) the rotational kinetic energy given by

Posted by Krishna Kant Chintalapudi at 10:24 AM