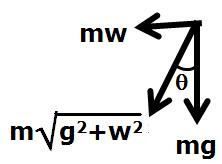 The easiest way to solve this problem is using Einstein's famous principle of equivalence. Since, the entire top moves with a linear acceleration w in the horizontal direction, it is as if it experiences a net force of gravity equivalent to

in a direction tilted to the vertical at an angle

Now all we have to do is to solve this problem exactly as 1.283, with the caveat that gravity is now tilted at an angle and has a different magnitude. 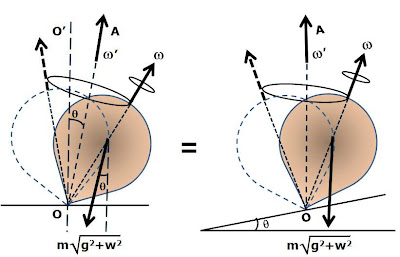 and on a planet with higher gravity of value

as shown in the figure. Thus, solving the problem exactly as in 1.283 it is clear that,

and acts at an angle of

tilted to the vertical as shown in the figure.
Posted by Krishna Kant Chintalapudi at 3:36 PM