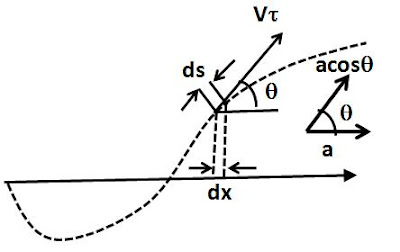 Let us first understand what is happening in the problem. A particle moves along some arbitrary path (shown by the dotted line - imagine a roller coaster ride for example). It moves in such a way that its horizontal acceleration is always fixed and equal to a. In other words if the the particle is moving along a direction

then, the acceleration of the particle along the direction of its motion (along the tangential direction) is given by

(the component of a along the tangential direction).

If the particle moves an infinitesimally small distance along the curved path ds, the distance it moves forward along the x-axis dx is given by,

This is clearly shown in the figure. 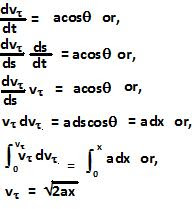 Can u please explain why initial tangential acc. is acos(theta)

I have changed the solution to be more understandable - hopefully the new solution answers all your questions.

Thanks a lot......every thing is now clear

But why can't I use conservation of energy? mgh=Kinetic energy???

conservation of energy using KE + mgh can only be used when the only force acting is gravity. Whenever there are other forces you have account for them since you are supplying energy through the other forces.