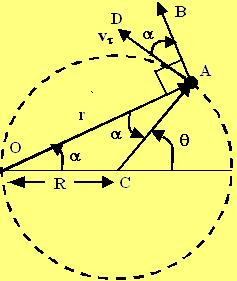 For solving this problem we will rely heavily on the figure provided. The particle moves along the circle shown in the figure and its angular velocity relative to point O is constant. Let

Form basic geometry in the figure we have,

Posted by Krishna Kant Chintalapudi at 2:47 AM

cool ... the solution looks so simple here, but I could not solve it... putting the link to definition of angular velocity was helpful. Great effort.

i did it by taking a particular case i.e. when the object is diametrically opposite , it gave the right answer since i think velocity would be same everywhere .