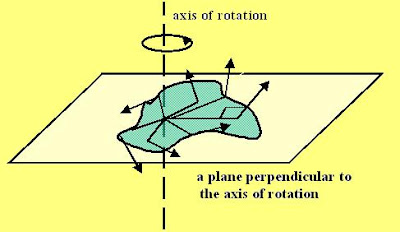 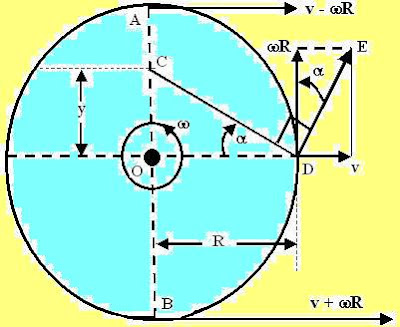 In the figure we consider two points A (at the top-most point on the disc) and C (at a point where the x-axis intersects the rim of the disc) on the rim of the disc. The velocity vector of A
is oriented along the x-axis, thus the axis of rotation must lie somewhere along the line AB (the perpendicular to the velocity vector at A) which is the diameter of the circle. The velocity vector at point D is DE and the perpendicular to DE at D is DC. The axis of rotation must thus lie at C - the intersection point of the two perpendiculars. Thus, to solve this problem we need to determine y, which is the length OC.

. If the velocity vector DE is oriented at an angle

then,
from the figure,

Also from the figure it is clear that,

Now we can use (1) to solve both parts of the question.

. Thus, the location of the axis of rotation in Cartesian coordinates is given by,

. Thus, the location of the axis in this case is given by,

Posted by Krishna Kant Chintalapudi at 9:44 AM

You can also use the fact that the velocity of the instantaneous axis of rotation is zero with respect to the outside frame.

If you use the instanteneous axis of rotation has zero velocity answer will come in one line.

agree too...
thanx for the clue

I must say, everythin' was very well explained