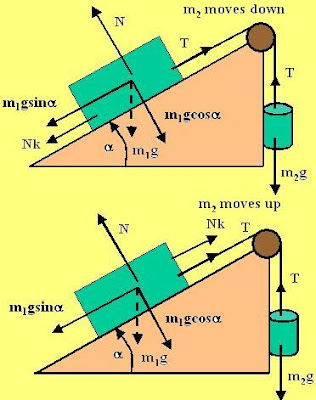 (a) The force diagram is depicted in the figure beside. Suppose that the mass

accelerates downwards at a rate w.

: There are two forces acting - the tension in the string T pulling the mass up and the gravitational force

pulling it downwards. Thus, we have,

: We shall resolve the forces acting on this mass along parallel and perpendicular directions to the incline.

In the direction perpendicular to the incline there are two forces acting on the body, the normal reaction N and the component of force of gravity

. There is no component of acceleration for the mass along the perpendicular direction to the incline.
Thus, we have,

Now considering forces along the direction parallel to the incline. There are three forces acting on the body - the gravitational force

(b) The force diagram for the case when the mass

is moving up is also provided in the figure. The only difference between the two cases is that the direction of force of friction acting on

changes its direction (since the direction of motion is now changed as well) and is now direction towards the upward slope. Thus, for this case the equivalent of equation (5) becomes,

In (7), w is the acceleration of the mass

along the downward slope direction. Now, since w>0 we have,

(c) The body will be at rest when none of the conditions (6) and (8) are satisfied and is given by,