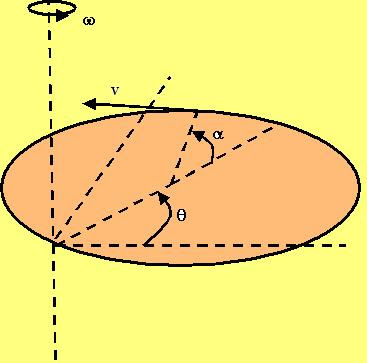 Basically, the body will experience two kinds of inertial forces when seen from the rotating frame of the disc, i) the centripetal force and ii) the Coriolis force.
What I shall do is derive everything from first principles so that the origin of these inertial forces is clear starting from as seen from the point of view of a stationary observer.

and the particle is aligned at an angle

with the diameter passing through the axis. The position vector

of the particle with respect to a stationary observer located at the intersection point of the disc and the axis of rotation is then given by, 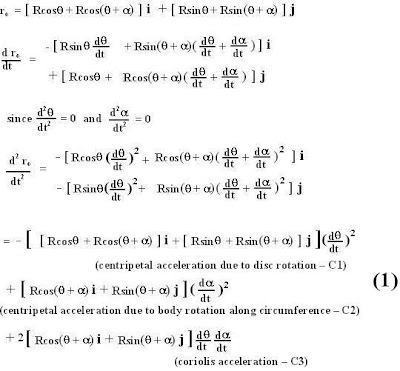 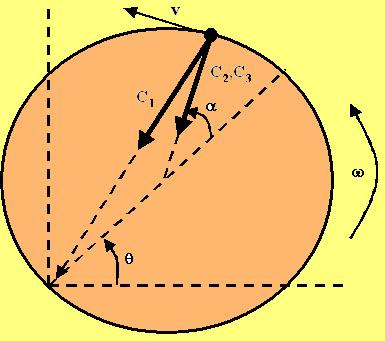 Now let us consider an observer fixed to the rotating frame of the disc. With respect to this rotating observer, the body is simply rotating around the disc's circumference at a constant rate
at a rate

. The acceleration of the body as seen by this observer is thus simply

directed towards the center of the disc (C2). Thus, the remaining components of acceleration (C1 and C3) will be seen as inertial forces in this rotating frame of the disc (acting the opposite direction to the directions of the accelerations).

The problem says, the body moves in such a manner that the sum total of the inertial forces when the body is at the farthest point (i.e diametrically opposite to the axis or when

) but in the opposite direction. This will ensure that the Coriolis force opposes the centripetal force and exactly cancel it when the body is at the farthest point from the axis.

b) The inertial forces as seen by the observer will thus be the sum of C1 (centripetal force acting outwards) and C3 (Coriolis force acting towards the center of the disc) as shown in the figure below. 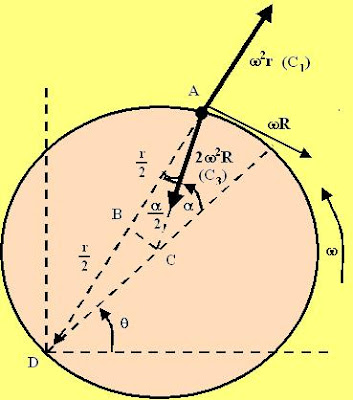 Let the particle be a distance r from the axis (AD=r) . Let CB be the perpendicular on AD, then AB=BD=r/2. Also angle BAC = 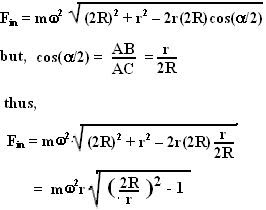 Sir why have u stopped?

It is some excellent work and I appreciate it to the core of my heart.....
Plz don'tpause.
I been a regular visitor plz don't let me down...
I'm giving the JEE this yr

thank you very much for your appreciation. I was just a bit busy with work. I will get back to posting the solutions...