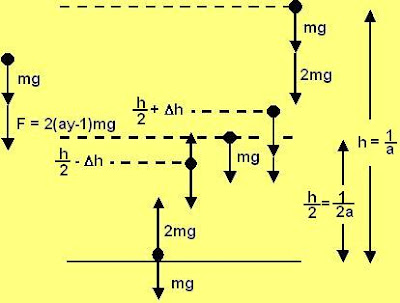 At any given time, there are two forces acting on the mass, the force of gravity mg and the force F, so that the total force acting on the mass is F+mg. This means that when the body starts its motion upwards, there is a net force of mg - 2mg = -mg (acting upwards). As the body moves upwards and its height y increases the magnitude of F keeps decreasing. At a height

the magnitude of the force F becomes zero. After this point, F reverses its direction and starts to act in the same direction as the force of gravity. The action of the force is completely symmetric (like a mirror image) about the height as shown in the figure. In other words if you take any two heights

, the force F at these heights will be equal and opposite. From this symmetry it is evident that the maximum height achieved h will be

. This is indicated in the figure. 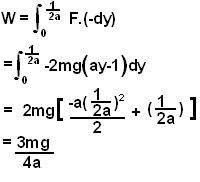 The reason we use the negative sign in (-dy) is since the direction of increase of dy is in the upwards direction whereas we have chosen the positive direction to be downwards for F.

The gain in potential energy is simply given by

since at the end of half its accent its at a height of 1/2a.
Posted by Krishna Kant Chintalapudi at 6:45 PM