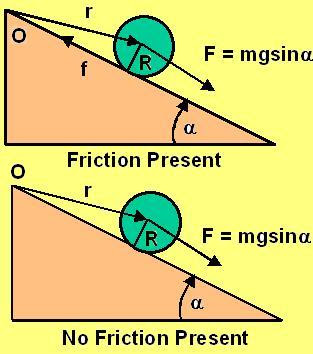 . The force of friction f acting on the sphere does not induce a torque on the sphere as seen from O since it passes through the point O so that moment arm for the friction force is 0.

Clearly the absence or presence of friction does not alter anything since it has no net torque on the sphere as seen from point O.
Posted by Krishna Kant Chintalapudi at 2:58 AM

The explanation provided (that the frictional force does not produce any torque about point O) appears alright, but look at the problem from a different perspective.

For the rolling sphere, first compute the linear momentum(P) at time 't' which is equal to (5/7)mgtsin(alpha) and then take its moment about point O. The moment arm is R and therefore the angular momentum about O is (5/7)Rmgt sin(alpha).

This is different from your answer. Why the discrepancy and where is the error? I'm keen to know.

I had posted a comment/doubt this afternoon but later I got the issue sorted out.