As shown in the figure, at the time when the mass is at an angle

it has descended a height of

and thus has lost a potential energy of

. This potential energy will be converted into the mass's kinetic energy and thus we have, 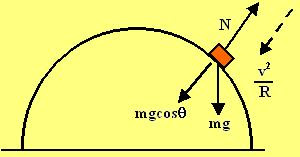 . The mass also has the centripetal acceleration (note that this becomes the centrifugal force in the reference frame of the observer on the mass and will act radially outwards) given by

in the radial direction directed towards the center of the circle.
Thus, we have,

When the body is about to leave the surface, the normal reaction becomes N=0. In other words we have,

At this angle the velocity of the mass can be calculated using (1) and substituting the obtained value of angle as,

.
Posted by Krishna Kant Chintalapudi at 3:04 AM