. The force acting on the ball in the tangential direction of motion will be

(as shown in the figure). The acceleration in the tangential direction will thus be

. There will be no radial component to the acceleration since the ball is stationary at this position.

The velocity of the ball at the lowest position can be determined by using conservation of energy. As shown in the figure, the height the ball would have fallen is 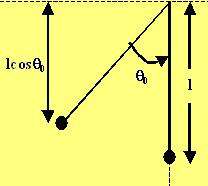 If both these accelerations are to be equal then,

Irodov and Abhay Kumar Singh gave the wrong solution to this problem!

so did u cracked jee