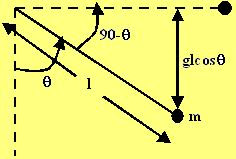 The speed of the sphere at a given angle

can be determined by the fact the total energy of the system will be conserved.
The potential energy lost will be 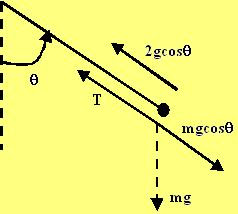 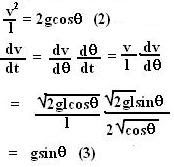 and thus the acceleration will be

. The net acceleration is the Euclidean norm of the tangential and radial accelerations given by, 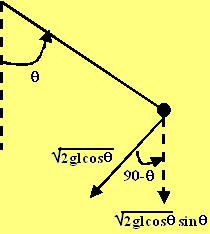 There are two forces acting on the mass along the radial direction, i) the tension T acting radially inwards and ii) force of gravity acting vertically downwards

. The radial acceleration of the mass is

directed radially inwards. Thus, we have,

(b) The vertical component of the sphere's velocity is given by

As seen from (6) the second derivative will be negative when (5) is satisfied. The tension at this angle can be calculated using (4) and is given by,

When the vertical component is 0,