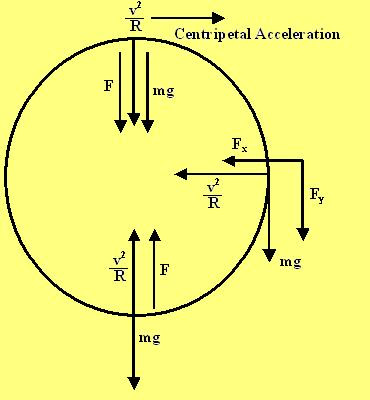 This problem can either be solved by using the centripetal force (pseudo force acting radially outwards as felt in the observer in the accelerated frame) or using centripetal acceleration (radial acceleration inwards as seen from a stationary external observer). I shall show both approaches just to indicate how they are related.

Using Centripetal Acceleration:
This is how a stationary observer on earth would solve the problem. Suppose that this person is sitting on a chair. The weight felt by the person is the force with which the chair pushes the person. Let the force exerted by the chair be F. The acceleration experienced by the body at any point in the loop is

always acting radially inwards (towards the center). Now we simply use F = ma to determine F. Let the weight of flier in the be mg, then as shown in the figure, we have,
At the lowest point of the Loop:

At the uppermost point of the Loop:

At the mid point in the loop: Here, we have to consider the weight along the x and the y axes. We have, 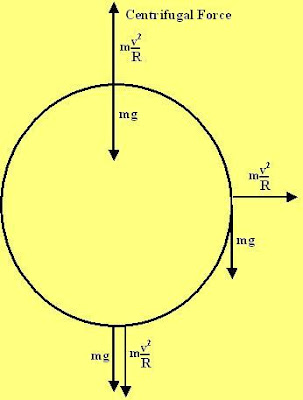 Solution using Centrifugal Force : To an observer in the airplane, he experiences a pseudo force (he feels like he is being acted upon by some invisible force)

that tries to push him outwards and he himself seems to be stationary and thus there is no acceleration. The force diagram is shown in the figure. It is easy to see that we will get the same result as above from the force diagram.
Posted by Krishna Kant Chintalapudi at 9:32 AM