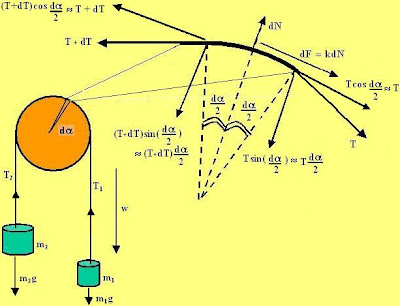 
Along the normal direction we have three forces acting, i) the components of tension pulling this string piece along the radial direction

as shown in the figure ( for small values of

can be approximated by

see here ) and ii) the normal reaction dN acting upwards. Since the piece of string does not have any component of acceleration in the radial direction we have,

As the limits of all the variables dN, dT and

will tend to 0 and equation (1) will be reduced to,

, ii) the component acting on the right of the string

and iii) the force of friction dF as shown in the figure. At the slipping point, dF = kdN . The string has no mass and the system has just begun to accelerate. Thus we have,

a) Now let us consider the forces acting on the masses. On mass m1 there are two forces, i) the gravitational force m1g and the tension T1. The masses are not accelerating just before the slipping condition so,

By the same reasoning,

But we already know that

(b) In this part the masses are accelerating at a rate w and so we can rewrite equations (6) and (7) as,

even though for this part

Posted by Krishna Kant Chintalapudi at 1:40 AM

dear mr. krisna-kant
i would like to know how u arrived at he final answer from equations 8,9,10.
and since in part b) eta is greater than eta(naught) shouldn't eta be equal to M1/M2(new variables) rather than m1/m2(old variables).thanx
ps:good website.pls post solutions to problems of electrostatics too.

yes you are right, the variables m1,m2 in parts (a) and (b) are to be treated as different variables - they are not the same. In part (a) m1/m2 = eta(naught) while In part(b) m1/m2 = eta and these are not the same as for part (a).
T2/T1 ratio however does not change across the two parts since the string is massless.


I was just a bit lazy to create new notation for part (b). Sorry for the confusion. If it causes too much confusion maybe I can rename the variables.

Yes I would love to put electrostatics solutions as well, maybe I should start a parallel thread perhaps. Dr. Irodov created too many problems and I have too little time ... I am inching.

Dear Mr.Krishna Kant,
Thank you so much for taking time out for writing these solutions. They are proving to be a great help, especially the calculus-based problems.Please do keep up the good-work.
Also could you please mention which problems are not under the iit-jee syllabus.
Thank you,
Dhruv Anand.