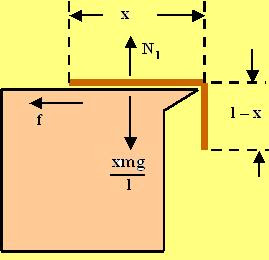 Suppose that some instant x is the length of the chain remaining on the table. The mass of this part of the chain (assuming the chain is homogenous) is given by

and hence the force of gravity acting on this piece is

Since the chain is slipping, the maximum force of friction that can be offered by the rough surface has been attained and is equal to Nk, here k is the coefficient of friction.

The problem states that only when initially

length of the chain hangs, the chain will start slipping. The force of gravity that is responsible for pulling the chain downwards at this initial time is given by

. So from (1) then the force of friction opposing the motion of the chain will be

. This means that in order for

to be the minimum hanging length to slip we have,

The work done by friction is thus given by,

The negative sign comes because at all points when the chain slips, the force of friction acts in the direction opposed to the motion of the chain.
Posted by Krishna Kant Chintalapudi at 6:17 PM

I just stuck at that point that the friction force will decrease as the chain slips!! wonderful, in fact sometime I think You are too descriptive, anyways great work man!