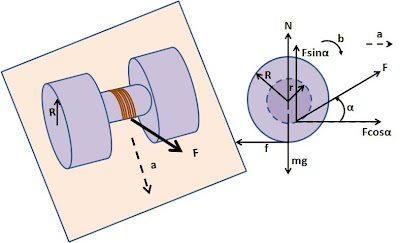 If there were no friction, then the spindle would simply be dragged forward due to the horizontal component of the force F. The force would also induce a torque of magnitude Fr on the spindle and cause it to spin in the counter-clockwise direction. Friction between the floor and the spindle however, opposes this with a force f acting in opposition to the force F. This friction force acts on the wider circular part of the spindle and induces a torque fR in the clockwise direction. This frictional torque is eventually responsible for making the cylinder roll without slipping on the floor.
In the Horizontal direction: there are two forces acting on the spindle, i) the horizontal component of the force F and ii) the force of friction f. Let the acceleration of the spindle be a. So we have,

The force of gravity passes through the axis of rotation and does not induce any torque on the system. Let the angular acceleration of the cylinder be b. As mentioned there are two torques acting on the spindle, i) due to the friction of magnitude fR in the clockwise direction and ii) due to the force F of magnitide Fr in the counter-clockwise direction. So we have,

Since there is no slipping between the spindle and surface we have,

Now we can find the acceleration as,

and ii) the rotational kinetic energy

. So the total energy of the spindle is given by,

That gives a different answer.

W = F.s is only true when there is no rotational motion.

when there is some rotation also induced in the system, then, the net work done is,

W = F.s + T.theta where T is the torque due to the force and theta is the angle of rotation.

In this problem, there is also a torque T = Fr generated by the force. The theta moved is 0.5at^2/R. However, while the torque tries to rotate the spindle in the counter-clockwise direction, the spindle rotates in the clockwise direction. Thus, theta and T have opposite signs.
So the work done by torque is -Fr(0.5at^2/R).

The net work done is:

I hope this helps to clarify your answer.

sir when the spindle moves forward the frictional force shld also act in the forward direction i suppose...coz in rest of the questions it is lyk tht...if i am wrong plz help me sir...i am hving a great confusion in tht...:(
thanks a lot..

Friction always acts in a direction that opposes slipping - that is the basic rule. So the direction of friction is always opposite to the direction in which the point of contact of the rotating surface (in this problem the spindle) is moving relative to the fixed surface (the floor).

oh..tht means if it was a cylinder and the force was acting tangent to the surface...then the frictional force would hv been in the direction of motion...me right?

thanks a lot sir for clearing my doubt...:D

sir,
in the second equation.. should'nt the torque due to 'F' bye Fcos(alpha)r .. the other component of 'F' (Fcosalpha)passes through centre..so it generates o torque ?