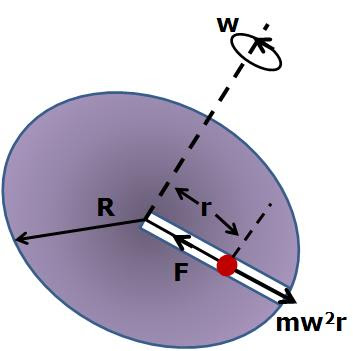 The moment of inertia of the (disc + point mass) system about the axis of rotation, when the point mass is at a distance r from the center is given by is given by

. Since the initial angular velocity of the disc when r=R is w0, since angular momentum is conserved we have,

In its final state, r=0 since the point mass reaches the center. Thus, setting r=0 in (1) we have,

pulling the point mass outwards. Since there is no radial acceleration, the force F must exactly balance the centrifugal force. In other words,

The work done by the force F is then given by, 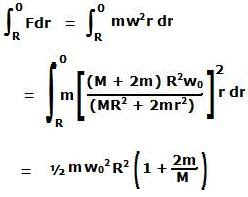 Posted by Krishna Kant Chintalapudi at 2:45 AM