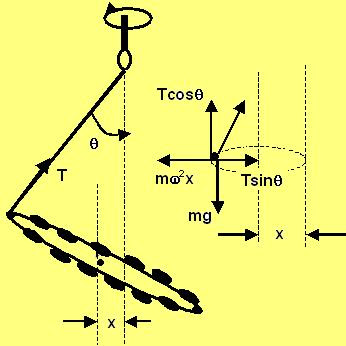 Suppose that the CG is x units off from the axis of rotation. As seen by an observer in the rotating reference frame, there are three forces acting on the center of mass, i) tension in the string T, ii) the force of gravity mg and iii) the centripetal force

. In the rotating reference frame, the CG is not accelerating .

In the vertical direction we have,

In the horizontal direction we have,

Posted by Krishna Kant Chintalapudi at 4:18 AM