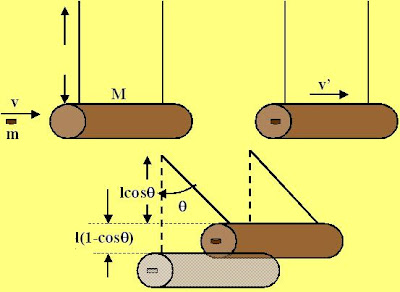 Initially suppose that the bullet comes along with a velocity v. As soon as the bullet hits the cylinder, it gets attached to the cylinder and now the entire (cylinder+bullet) system starts to move towards the right with a velocity v'. Since there are no forces acting on the (bullet+cylinder) system in the horizontal direction, the momentum of the (bullet+cylinder) system must be conserved before and after the collision. In other words,

At the end of this solution I will explain the inner workings of the law of conservation of momentum for the more inquisitive students using purely newton's laws.

After the collision the (cylinder+bullet) system starts to swing upwards as shown in the figure. During this process the kinetic energy of the (cylinder+bullet) system is converted into gravitational potential energy. Finally when the system reaches its maximum height, all its kintetic energy is converted into potential energy. Since the strings deflect by and angle

, the entire system raises by a height of

and thus gains a potential energy of

. The initial kinetic energy of the system right after the bullet fused into the cylinder is given by

. So from conservation of energy we have, 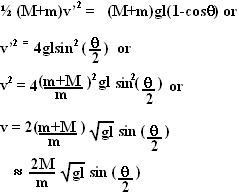 The equation for the dynamics of the bullet will be,

The equation for the dynamics of the cylinder will be,

Integrating both sides we have,

Suppose that the bullet moved for a very small time T before it came a complete stop i.e. vm(T) =0. So we have

. After the collision the kinetic energy is given by

. The difference is the loss of energy as heat generated by the material resistance that slowed the bullet. So the fraction of energy lost as heat is given by,

Posted by Krishna Kant Chintalapudi at 5:22 AM