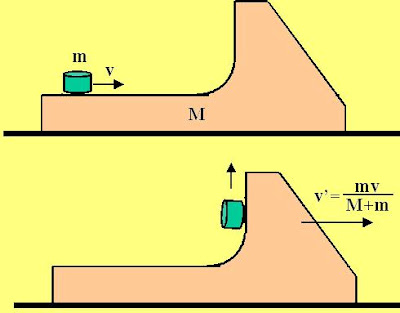 In addition to conservation of momentum, energy also will be conserved at all times. Initially since only the disc is moving, the total energy is the kinetic energy of the disc i.e.

, ii) the kinetic energy of disc

and iii) the gravitational potential energy gained by the disc mgh. Since energy must always be conserved,

Posted by Krishna Kant Chintalapudi at 11:55 AM

Sir i aprecciate your work...im studying physics and failed the first half-year...but i realised what are my priorities in my life and that i love physics,and irodov is my way to get back on track,so this means a LOT to me,tnx so much!!!!...btw this problem confused me a lot cause they first ask for starting speed of the bullet,and then the loss in energy...when solving (a) i took that loss into account and messed up everything,couldnt solve it...then i looked at your solution and just punched myself :)...tnx again.